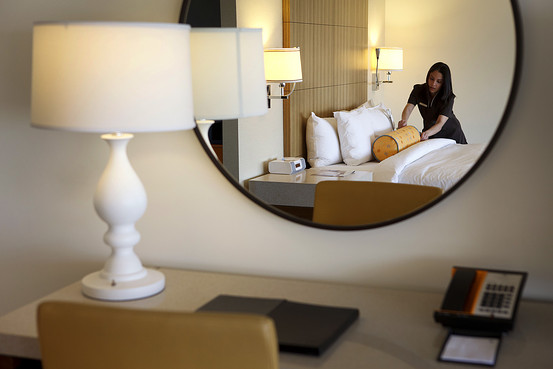 Marriott International Inc. is investing in their future by expanding globally in emerging markets around the world. Led by a new, internationally focused Chief Executive, the large hotel chain is going after the global market. Though they already have 630,000 hotel rooms in 70 countries, Marriott wants to grow. Over the next three years, they will be investing $2 billion in order to expand by 90,000 to 105,000 hotel rooms and be present in 100 countries, in addition to renovating existing hotels.

A key reason for this global vision is ‘rocky’ economies that both the core U.S. and European markets have thereby offering little room for growth. Internationally, Marriott will focus the majority of their attention on the Asian market, specifically on high-growth China. A key focus of global expansion is the emphasis on mid and low price hotels that aim to attract different segments in targeted high growth Asian countries, such as China, India, Vietnam and Indonesia, as well as Latin American countries, like Brazil.

Marriott is trying to beat competitors, a key driver in global expansion, through segmented consumer targets in emerging markets while making sure not to ignore existing ones. Under their new leadership, Marriott is pushing forward globally with a high risk, high reward three-year plan that requires lofty investment capital as well as tremendous potential.

The Good!
Marriott International Inc. is utilizing intelligent marketing strategies in order to generate global revenue. The key reason to even consider new strategies is the large-scale opportunity for growth. Though the core U.S. market does present a few opportunities like investing in lower-budget nationwide and higher-budget options in North Dakota growing energy sectors, Marriott knows that large gains are simply not available in the U.S..

Additionally, like the U.S. market, the European market is not promising economically so it makes strategic sense to target emerging markets where high growth rates, thus revenue, are possible. Better yet, Marriott has experience internationally so their hotel diversification will be easier, and more feasible to accomplish since barriers are already known.

Another key is the ability and consumer know how that Marriott has regarding building hotels at different price points which they can do based on the targeted country. For example, it wouldn’t make sense to introduce higher-end Marriotts in India since it is the middle class that is growing there thus the lower-end Fairfield brand makes better sense to introduce.

Having the luxury of previously developed hotel brands at different brands allows for flexibility and adaptability for every country they target. It also allows Marriott to further penetrate existing markets, like high growth China while also developing new ones like Brazil. The added competitive drivers in Hyatt and Wyndam that have begun introducing global hotels at midprice price points gives that final push towards global expansion that Marriott hardly needs but is still heeding nonetheless.

The Bad
In order to truly develop these global markets, Marriott International Inc. isn’t just dipping a toe in the water, they are jumping in with all their clothes on. Investing $2 billion is a large amount so any failures could have long-lasting financial repercussions. If they operated on a long-term plan, as opposed to the current three-year plan, Marriott could avoid some of the risk that this quick global leap brings with it. This is all the more true if the U.S. and European markets truly aren’t that dependable meaning they are no longer the cash cows since they might lack the stable position they once held.

Given the market potential of the emerging markets they are investing in, Marriott’s three year plan is understandable but is the risk too high? Competitors are only starting midprice lines in China yet Marriott is, to put it bluntly, attacking many, if not all, high growth markets thus adding more risk with the hope of more reward. The China risk is even higher since luxury rates there are already set too low thereby the expansion of midprice options, which presumably will be at lower price points than desired, could make profitability difficult in the primary international market that Marriott wishes to expand in.

One final point of concern is the seeming lack of understanding regarding the market in Brazil. Why only open lower-end hotels in a country that not only has a booming economy but also is about to host major global events that will undoubtedly attract high-end consumers. It appears to be the incorrect reading of the market. The new Chief Executive is bringing his international vision and passion to the Marriott brand but quick push could be a case of too much too soon with a leader that is too new.

Conclusion
Marriott International Inc. is making the correct decision to expand globally at the rapid rate that their new Chief Executive has laid out. They have a strategic plan in place that targets high growth areas with appropriately priced hotel chains for each area, with the exception being Brazil which needs to reevaluated. With an already established global presence, in addition to an understanding global market, Marriott is poised to takes its Courtyard, Residence Inn and Ritz-Carlton brands to emerging markets.

They have resided in the U.S. for decades but with a changing marketplace that has higher potential for growth globally, Marriott is wise to look to overseas for expansion, especially with competitors already doing the same. The bottom line is to generate revenue both in the present and in the long-term and Marriott has a good strategic plan positions them well both in the U.S. and the key global markets. Marriott has courted their core markets for too long and now is the time to take up residence elsewhere.