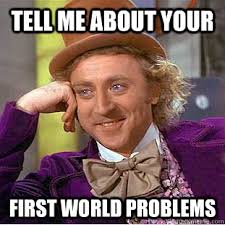 Unless you live under a rock, you’ve probably heard, seen, read or perhaps even tweeted the widely popular meme #FirstWorldProblems. The premise of the meme or hash tag is simple, use it to express the daily inconveniences of living in a developed nation a.k.a. first world.

These so-called problems are hilarious because they are so ridiculous, especially when compared to third world problems like poverty or hunger. However, because these first world problems relate to what you, me and other first-worlders “go through” while we live our perfectly fine lives, the memes are often just plain relatable fun.

As you can see in the PSA-style ad, these first world problems take on new meanings when given from the perspective of poverty-stricken Haitians. This clever, yet sublimely simple, idea to get an important message across by reversing the ironic hash tag line is powerful.

#FirstWorldProblems
Are Not Problems

Unlike large companies, charities like WATERisLIFE don’t typically have large advertising budgets so they must rely on clever i.e. cheaper, instantly memorable creativity to get their messages across. The idea to put an interesting twist on two current trends, #FirstWorldProblems and memes, attracts an instant audience which serves to increase the reach of the ad which, in a word, is brilliant!

Now, the sole point of the ad is to not just to get you to laugh at the irony of third-worlders “mocking” us first-worlders, the point is to make you aware of a specific issue and, in turn, help out through donations.  So, was it successful or did you chuckle a bit as you appreciated the cleverness of the ad before you closed the tab and continued with your first world problems? Humor and irony aside, here (again) is the final message from the YouTube clip.

Donate to help bring clean water to those in need.

Calls to action are difficult, just ask Sarah McLachlan, but they are important so before this ad becomes saturated, do something. Share this clip with friends as a haha this is so funny joke but know that you might, might just be helping less fortunate third-worlders by poking fun at first-worlders like yourself. Make sure you keep the tab open!